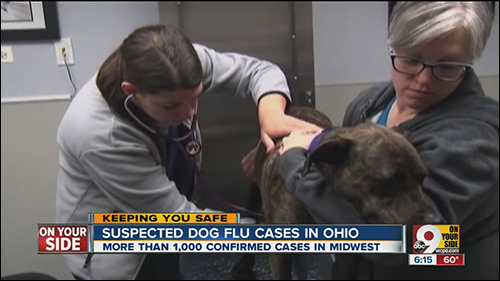 A canine flu outbreak (H3N2) has sickened many dogs in the Midwest, and veterinarians are cautioning pet owners to keep their dogs from going nose-to-nose with other pets to stop it from spreading further. Both viruses can cause persistent cough, runny nose and fever in dogs. Experts say a small percentage will develop more severe symptoms. The H3N2 infection has been associated with some deaths. Positive tests for H3N2 have also been reported in Alabama, California, Texas, Massachusetts, New York, Wisconsin, Michigan, New Jersey, Iowa and Indiana, according to the most recent report by Cornell University’s Animal Health Diagnostic Center. And a new case was confirmed Wednesday in the metro Atlanta area of Georgia.

What are the symptoms?
While most dogs will show typical symptoms of kennel cough, a small percentage of dogs will develop a more severe illness. Symptoms of canine influenza virus include:

How serious is it?

It’s estimated that several thousand dogs have been affected by the virus, but not more than 10,000 at this point. The mortality rate is about 2-3%.

How can I prevent my dog from getting it?
Dog owners need to have increased vigilance to avoid dogs that appear sick and to not take their dogs to public places if they are sick. Avoid taking your dog to dog parks or to doggy day care facilities if you are in the affected areas. Dogs are most infectious before symptoms are apparent, and can continue shedding the virus for around 10 days. This means that by the time symptoms are seen, other dogs may have already been exposed. Luckily, Pet Playgrounds offers dog fence kits that can act as your personal dog park right in your own backyard.